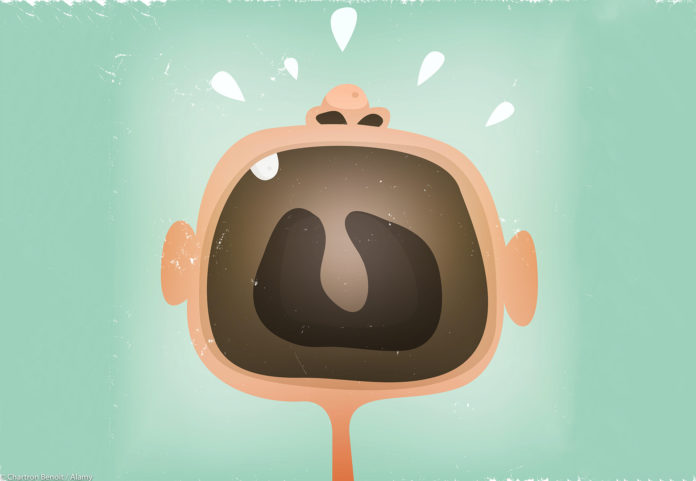 The Wind-up Cry
Cause: Denial of toy/food/TV.
Symptoms: Can be on a hair trigger. Often begins as a low whine but builds over several seconds to a sound that is second only to early-warning nuclear or tsunami alerts. Ranks between 5 and 7 on the “I’d-rather-have-a-screwdriver-shoved-in-my-ear” meter.
Solution: Concrete ear muffs or a deaf grandparent. In extreme cases (i.e. in a restaurant/shop/on public transport), bribery with food and toys MAY result in silence.

The Flip-Top Head
Cause: Trip/fall/bang/dropped toy/shopping.
Symptoms: No warning. Is delivered via an instant, ear-splitting shriek which can be heard up to 12 miles away with a following wind. Even irritated onlookers who normally can’t help but hand out useless advice will cross the street to avoid getting too close.
Solution: One of the few occasions requiring the emergency deployment of chocolate or sweets, regardless of how old or fluff-covered. DO NOT attempt to insert fruit.

The Screaming Abdab
Cause: Denial of ANYTHING while shopping.
Symptoms: Ear-splitting scream, with the volume turned all the way up to 11, apparently requiring no breath to maintain it. Most often takes place in supermarkets, usually at their most crowded, prompting not-so quiet tutting from elderly/non-parent onlookers. Always accompanied by epic levels of embarrassment.
Solution: There’s nothing for it but to have near-saint-levels of patience, accompanied by jolly eye rolls and cheery smiles to all scowling passers by. Pretending it’s not your child is NOT allowed. Attempts to mimic the TV ad in which the screaming toddler shuts up when its mum loses the plot will simply result in being thrown out of the store.

The Huff and the Stomp
Cause: Being told to do/not do something.
Symptoms: Instantly recognisable due to the presence of crossed arms, a deep frown and the audible huff. Usually preceded by toy-throwing and succeeded by a door slamming somewhere. In between, feet are alternately elevated and brought down to the floor in the most dramatic and noisy fashion possible to indicate to all within earshot in no uncertain terms that THEY ARE NOT HAPPY.
Solution: Withdraw silently to the moral high ground where you can happily camp out and live to fight another day. Do NOT laugh.

The First-Ever Swear
Cause: See above.
Symptoms: Can occur in children as soon as they are able to speak, but is usually shouted at the top of the voice in as public a place as possible for maximum parental embarrassment and subsequent judging by strangers. Some children may combine with the huff and stomp if not in public.
Solution: Depends on the parent’s view of bad language, the age of the child and the severity of utterance. Can result in a simple telling off or more severe punishment if the small person gets really creative. Once out of the room, about ten minutes of silent parental giggling will take place. They must NEVER see you.

The Silent Treatment:
Cause: Denial of TV/gaming/computer services.
Symptoms: Directly and inexplicably linked to electrical devices. Usually results in tightly crossed arms, a face like thunder and no oral response to stimuli. In severe cases, bribes may be refused/thrown in your face.
Solution: Sit back and enjoy the up to ten minutes of relative peace and quiet.

The Huff V2.0
Cause: Absolutely anything you say or do which might make them feel slightly hard done by.
Symptoms: Similar to the younger version, it involves a deep intake of breath, sometimes accompanied by an eye-roll or desultory shake of the head. Accompanied by the near-magical ability to make you feel like you’re the worst parent in the world.
Solution: Bite tongue. Scour internet for guides on how to grow more patience.

The Flounce
Cause: See above. Possibly also the denial of pocket money/trips out.
Symptoms: Often preceded by an exchange of sharp words (leading to second, third and we’ve-totally-lost-count swear). Features a demonstration of bodily movement – scotching your theory why they can’t pick up after themselves – as they strop to their bedroom. Usually concluded by the violent slamming of a door.
Solution: Grit teeth and clockwatch until wine-o-clock.

The First ‘I Hate You’
Cause: See all of the above.
Symptom: Comes in two forms: 1) Whispered under the breath, taking advantage of the fact your hearing’s not quite what it was; 2) The full-blooded, rage-fuelled, scream-it-from-the-top-of-the-stairs variety. Both suck mightily, but at least with the first one you can pretend you didn’t quite hear it.
Solution: Sit back, glass in hand, and flip through the pages of the baby album, remembering a time when all you had to worry about was no sleep and endless washing. 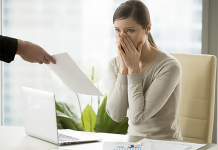 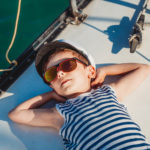 KinBox
Wealthy parents seem to have it made when it comes to raising their children. They can offer their kids the healthiest foods, the most...

7 Wonderful Things I Did Before I Had Kids